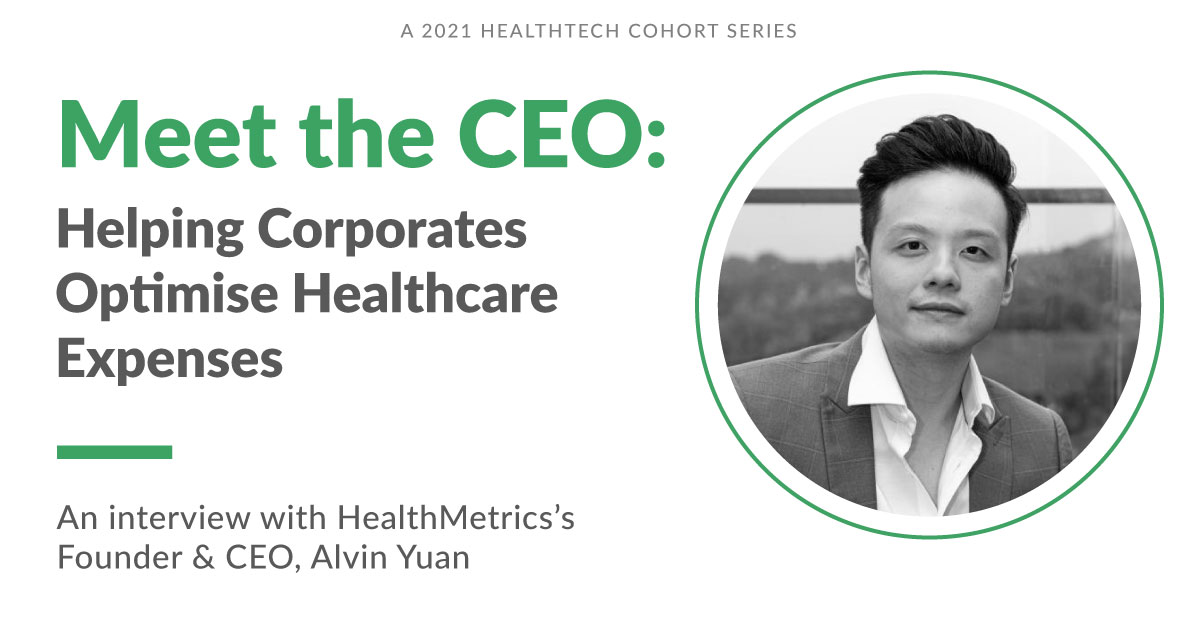 Rising healthcare costs is an industry problem driving many HealthTech startups to build innovative solutions. Most startups are tackling the front end by improving the delivery of care and access to services. Alvin Yuan, Founder & CEO, HealthMetrics

, decided to work on the back end to bring down healthcare costs. HealthMetrics is an end-to-end cloud enterprise platform that makes it easier for organisations to manage their employee health benefits. “The big picture is to address rising healthcare expenditure by helping organisations optimise their healthcare spending,” says Yuan.

Changing the Status Quo With Efficiency and Transparency

With HealthMetrics, organisations can craft their entire employee health benefits plan to their needs. They have the option to go for an insurance company, self-fund or design a hybrid plan. The startup also helps organisations connect to all the relevant stakeholders more efficiently. “We consider ourselves a healthcare financing startup. We take over the entire financing cycle and make sure the healthcare spending on the corporate side is optimised,” says Yuan. “Traditionally, when an organisation spends on insurance premium, there are a lot of people in between. All of it is lost cost,” explains Yuan. The intervention of HealthMetrics eliminates the extra cost to companies.

In the long-term, Yuan envisions restoring the bargaining power to organisations, the real payers spending on healthcare out of pocket. Currently, insurance companies and healthcare providers control the status quo. “Insurance companies have the power to decide whether they want to pay your claim or not, and that’s why they’re highly regulated,” says Yuan. “When we have a volume of customers behind us, we can shape a lot of things rather than one organisation trying to negotiate with an insurance company,” he explains. It will also allow organisations to decide healthcare outcomes. “Transparency across stakeholders will let organisations choose whether they want to engage with certain healthcare providers,” adds Yuan.

From Identifying the Problem to Solving It

Born and raised in Malaysia, Yuan belongs to a family that has been engaged in professions related to healthcare. “It was natural for me to pursue a career in this field,” he says. Yuan graduated as a pharmacist but didn’t want to practice it. Instead, he spent the next decade in healthcare financing, business management, economics and technology. Being around his family, coupled with his professional experience, exposed him to the nuts and bolts of the complex healthcare system and how things are done traditionally. His many interactions with corporate clients and doctors showed that rising healthcare costs were a common concern. “All of them had the same problems, and we would talk about what could be done. I looked for a solution in the market, but there was none,” says Yuan.

Although Yuan had identified the gap, he started working on his idea only three years later when he met Advent Phang, Co-founder and CTO, HealthMetrics. They discussed the idea of HealthMetrics in a casual conversation, and Yuan mentioned the problem his clients were experiencing and told Phang about the potential solution. “I told him if someone can build a solution like this, we’re going to re-shape the industry together,” recollects Yuan. They decided to take the risk and founded HealthMetrics in 2016.

Yuan describes his passion for healthcare as a love-hate relationship. “We hate it because it’s so complex and regulated, but we love it because it challenges us,” he says. Given the billion-dollar power players in healthcare, Yuan came across many naysayers in his early days as an entrepreneur. He was told that insurance or pharmaceutical companies would obstruct him and that no hospital would change its workflow. “There are always these comments which deter people from entering this market, but people who are in it probably just don’t care,” says Yuan. The potential to change the status quo and reform traditional processes is what excites him about working in HealthTech. “The risk is high, but so is the reward. I think all HealthTech startup founders are adrenaline junkies to a certain extent,” says Yuan.

The entrepreneur considers the growth of HealthMetrics as his indicator. “Growth comes for a reason, and we must be doing something right,” notes Yuan. “Organisations that have tried our solution don’t leave us because they see the different perspective,” he adds. Like most innovations, Yuan believes HealthMetrics is a solution that organisations want but don’t know yet. “I think they resign to the traditional way of doing things saying ‘this is the way it is, but they should get out of their comfort zone and accept new ideas.” He is confident that organisations will notice a massive difference in trying HealthMetrics.

Adapting to the CEO’s Role and Learning From Mistakes

As a CEO, Yuan’s greatest challenge was the identity crisis he experienced in the early years. “I felt like I’m supposed to be doing everything but didn’t feel like I was excelling at everything,” he shares. Yuan found himself jumping between roles, trying to help where he thought required. “I felt like sales need help, then I would jump to operations, but it seemed like I was slowing things more than helping.” Finally, he realised he should devote his time and energy to the company’s hardest problems. “I would review the company’s status and ask myself what is the hardest thing right now. It would probably be something never done before, starting a new line of business or fundraising. These were not a part of daily functions,” explains Yuan. It became easier once he focused on taking the company to the next level and leaving the rest to his team. He would advise the same to new entrepreneurs. “If you feel lost, just focus on the hardest thing because if you get someone else to solve it, then you’re not fit to be a founder.”

While he looks back and knows there were mistakes, Yuan wouldn’t do anything differently. The entrepreneur views mistakes as an opportunity to learn. “Without doing that thing wrong, we wouldn’t have learned. That would set us up for failing the next time it happens,” he says. Since entrepreneurship is unpredictable, Yuan doesn’t expect a mistake-free path. “Even if we fix one mistake, there will be other mistakes that will happen anyway.” His team is the source of his inspiration. “Sometimes they work harder than me. The kind of ideas they come up with makes me think they should be running this,” says Yuan. Open conversations with his team inspire him to do better. “They want to be better, and that makes me want to be better.”

The best piece of advice Yuan received was from a friend when they were in their late 20s. “He would wake up every morning thinking that he’s of a much older age and asking himself whether he was where he wants to be in his life. He then internalised what he wanted to do better.” The practice of thinking ahead to a future age to decide his path in the present made an impact on Yuan. “It’s like you have a second chance to make it right. I practice it until today. It helps me focus and gives me the optimism I need.” That’s how Yuan checks whether he’s on track to achieve his vision. He recommends that new entrepreneurs read The Hard Thing About Hard Things by Ben Horowitz. “It’s unlike the feel-good entrepreneurship books that tell one to dream big. This one talks about the things that actually happen, how hard it is to run a business and how one has to make hard decisions.”

According to Yuan, startups can constantly benefit from platforms like the Galen Growth HealthTech Cohort. “There is no chance for us to be out there unless we shamelessly try to connect with the important people on LinkedIn.” In addition to network access, the entrepreneur believes it facilitates valuable exchange between startups. “These programmes bring ideas and people together, open channels for partnerships and ideas. We can look at what others are doing across the region and see if we can either partner or apply their learnings to our business,” says Yuan. “It also helps to propel us forward by keeping us informed about the next big things,” he adds.