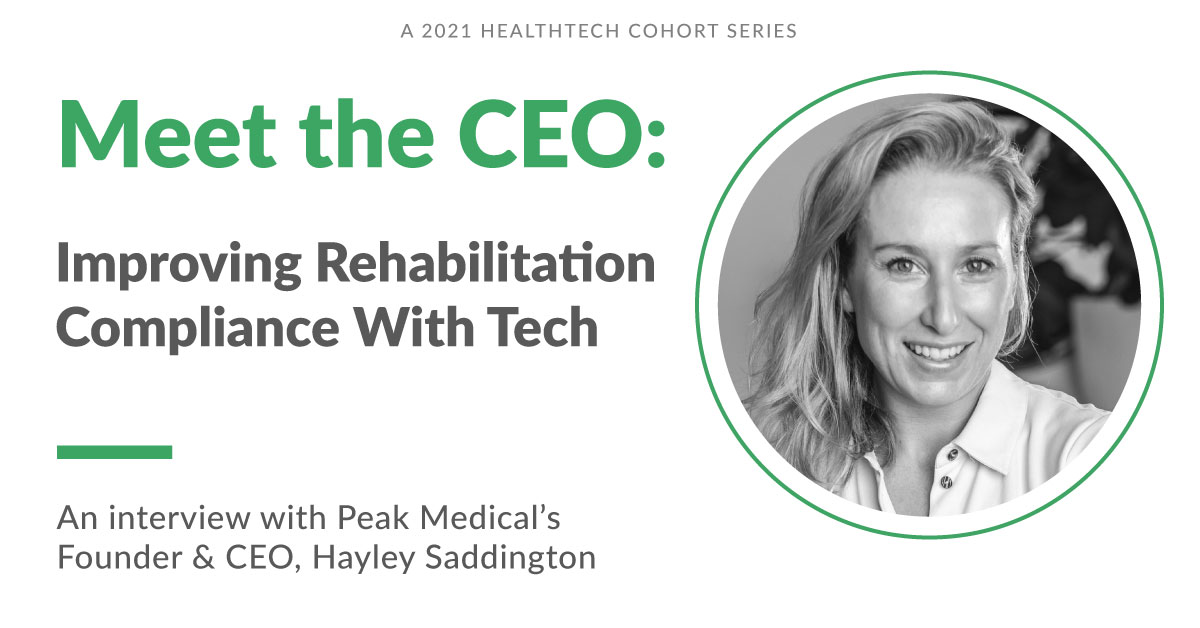 , became aware of the importance of access to healthcare at a very young age. When her father had a farming accident, they were about 500 km from the nearest hospital and he had to be airlifted for surgery. The lengthy recovery process took a toll on the family too, as it required travelling long distances back and forth. “From a very early age, I was exposed to thinking about how we can serve our loved ones better after they are injured,” says Saddington.

While the defining life experience led Saddington to study physiotherapy at Harvard University, entrepreneurship came naturally to her. “Growing up on a farm exposes you to situations that need you to think laterally and use what you’ve got. No one is going to do it for you, so you have to be confident in your skills,” she says. These qualities are the building blocks of an entrepreneur, believes Saddington. Her thought process has always inclined towards looking for solutions and brainstorming how something can be done better.

It’s this inherent style of thinking that made her look differently at the goniometer. “It was a really archaic tool, and I wanted to see if there was space to innovate and make it better,” says Saddington. She developed a digital goniometer through her first company HALO Medical Devices. “It became the number one accurate digital goniometer and was used by physiotherapists in 23 countries,” informs Saddington. It also won the People’s Choice Award on ABC’s The New Inventors and attracted attention on Shark Tank Australia.

Her work with HALO Medical Devices took Saddington closer to the orthopaedics field, and she trained in orthopaedic sales and robotics. Working with one of the busiest surgeons in Asia-Pacific gave Saddington the opportunity to interact with many patients. “I collected their data and understood their pain before they went into surgery,” recollects Saddington. The first-hand interaction with patients inspired her to think of ways she could make their life better. This led her to start Peak Medical and work on technology that improves the recovery of surgery patients.

One of the startup’s focus areas is looking at existing orthopaedic devices and apps in the market and analysing their effectiveness. The other focus is compliance with post-surgery rehabilitation. “Compliance to the rehabilitation after total knee or hip surgery is around 20 per cent which is really low,” says Saddington. Since post-surgery physiotherapy is required daily, it becomes costly and time-consuming. In addition, access is a challenge to a majority of the population. “To change that compliance with our technology, we’re building a solution that comprises of a wearable device and an app,” informs Saddington. Equipped with the nurse’s education and surgeon’s protocol, the system replicates the physiotherapy experience in the patient’s home.

Peak Medical’s technology also engages with the patient and measures aspects of recovery that aren’t traditionally measured. “People are measuring things like how the knee bends but we want to know how stable the knee is because a majority of knee operation patients complain about instability but no one is measuring it,” explains Saddington. She also points out that the lack of tailored rehabilitation further contributes to non-compliance. “We’ve incorporated behavioural aspects in our application which is a strong USP and understands the patient in a way that’s never been done,” says Saddington. The feature takes into account the patient’s anxiety about going into surgery and how it affects their pain after the operation.

The startup’s mission is to drive higher compliance to recover people better and make the technology available at a low cost in the patient’s home to make optimal recovery more accessible. Their work is receiving recognition from the medical industry and the Australian government. Since it facilitates remote care, Peak Medical won the government’s Innovation Districts Challenge, which was launched to support businesses addressing challenges introduced by COVID-19. Through the win, the startup gained funding, awareness and helpful partnerships that expedited the product’s development.

Saddington is pleased to see surgeons attend the company’s workshops. “It means we are solving a pain point for them and their patients. They are also keen on doing trials when we’re ready,” she says. The nature of various partnership conversations also reassures the CEO that they’re headed in the right direction. “Everyone seems to be curious and wanting innovation in this space. I feel like we’re doing the right thing in a unique way because the doors are opening versus closing,” she notes.

What It Takes to Be a HealthTech Entrepreneur

Progress can often be so slow in HealthTech that Saddington believes one needs a deep reason anchoring them to be an entrepreneur in this industry. “It’s so difficult and takes so much time to get where you want and capitalise on your mission,” she shares. Having a vision of who she is helping allows her to keep moving forward. “I always have this image of someone who can’t afford or access healthcare,” she says. “As a company, it’s phenomenal if we can change their access to health.” Saddington’s motivation is equity. “It’s about driving that pace to ensure everyone has the same level of access. It sits very strongly with me and has been my driver for years.” She shares how her friends from university often tell her that she can turn around products and revenue faster in another industry. “I tell them someone has to do the slow run and change health.”

Committing to an idea, dedicating time and finding capital are the toughest challenges of running a HealthTech startup, according to Saddington. “Making sure the idea is right and sticking to it but also pivoting when you need to. Adaptability is a critical skill for entrepreneurs,” she says. Making time for your business can often be a mental challenge. “If you don’t have a supportive network, you have the additional pressure of explaining why you’re still working,” she notes. Finally, capital can be tough when you’re starting out. “You’re asking investors to invest in your idea when it’s just a concept and maybe not even a product yet. Attracting capital at that stage is the toughest and longest path.”

In her entrepreneurial journey, the one thing Saddington would do differently is to build a team around her. “I didn’t do that in my first company. I did a lot myself and bootstrapped longer than I should have. I think we could have been better if I had a team,” she notes. “Having a team is phenomenal for the founder’s mental health, the product growth and company mission,” she adds. It’s her biggest learning that she aims to correct with Peak Medical. “Establishing the right partners and capital to bring that team in is the number one priority.”

Living in the new normal of COVID-19, Saddington believes it takes extra discipline to unwind from work. “There’s no commute, we’re able to go from meeting to meeting and people are a lot more accessible so bringing that discipline is important,” she says. The entrepreneur consciously connects with friends, takes out time for exercise and meditation and keeps her nutrition in check. Saddington prefers podcasts to books. “I can listen to them during my walk or run and still learn and do my personal growth,” she says. Podcasts by Marie Forleo, Melissa Ambrosini and Dr Steven Gabrall are some of her favourites. “Marie Forleo brings amazing interviews and they’re getting better as she gets more established,” says Saddington.

‘Stay in your lane’ is the best advice Saddington has received. She believes it’s important to maintain your energy and not take on another’s mood. “It can be a roller coaster as an entrepreneur and every meeting is different,” she explains. “You can’t get stuck on the associated emotions. You have to be centred throughout the day.” The entrepreneur firmly believes that an individual is a sum of the five people around them. “I’m really cautious of who they are. That’s how I stay in my lane and keep out anyone who would bring that down,” she adds.

Making the Most of HealthTech in the Spotlight

The Galen Growth HealthTech Cohort facilitates collaboration which the tech industry needs, says Saddington. “We need to get things on to the market. Not only because people want them but also because there are big companies who have the capital to quickly turn out technologies,” she notes. “Collaboration can achieve that fast and the Cohort has brought that to us.” The Cohort has also helped the entrepreneur discover resources through other startups. “If there’s a need for someone like a developer, the Cohort has been amazing to reach out to other companies in the industry and openly ask for help,” says Saddington.

Parting with advice for aspiring HealthTech entrepreneurs, Saddington recommends taking advantage of the current time to bring an idea to life. “People have extra time and they’re open to helping. It’s the right time to validate your idea with a key stakeholder,” she says. Besides, COVID-19 has turned all eyes on health. “Investors want health in their portfolios and governments are raising initiatives that support health. There couldn’t be a better time. It may not last forever so you need to ride this wave as it’s very strong now.”