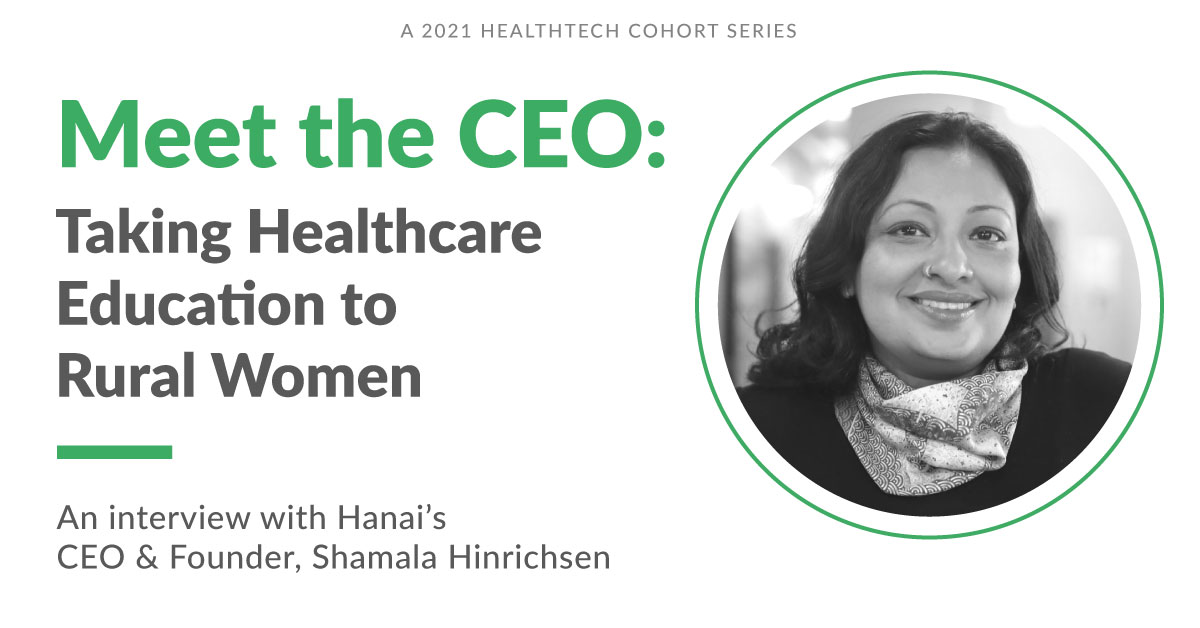 In urban or developed areas, when a pregnant woman notices certain symptoms or changes in her health, she would probably turn to the internet for information or call her doctor to verify her doubts. These methods would lead to speedy resolution or indicate that she needs to visit the clinic for further examination. However, women in rural communities neither know how to identify worrying symptoms or what to do in an emergency. Shamala Hinrichsen, CEO and Founder, Hanai

, first noticed this contrast when she volunteered to map the rural healthcare landscape of farming communities in India. “Some of the women had never seen a doctor in their entire lifetime, but they had the same medical issues and worries that anyone else in the world does,” recollects Shamala. “While access to healthcare is the biggest pain point, it struck me how healthcare education is a big pain point too.”

The realisation stayed with Shamala and prompted her to switch from a comfortable career in medical communications to the unpredictable life of running a social impact startup. Hanai, which means ‘to care for’ in Hawaiian, uses technology to take healthcare information to women in hard to reach areas. “We give women in rural settings a way to decide if something is an emergency or not. It’s crucial in rural areas as sometimes it can take them six hours or more to get to the nearest hospital,” explains Shamala. The apps that Hanai develops include tools that help women educate themselves about the various stages of pregnancy and infant care. The apps also have signposting features that guide users within five questions to more information or alert them to visit a medical professional.

Hanai has launched Jiwa Ibu in Malaysia, Imarisha in Kenya and in negotiations for Mauritania. While the apps for Malaysia and Kenya are Android-based smartphone apps, Hanai is working with SMS-based technology as it moves to regions with lower smartphone and internet penetration. “We are building on technology that is already there and people know how to use,” informs Shamala. For example, feature phone users know about SMS and are familiar with dialling a code to check their prepaid balance. In addition to technology availability and compatibility, the startup also has to consider many other factors to make healthcare information available to these communities. “Often a village will have only two phones that everybody shares, so we have to think about how do we ensure privacy if a woman wants to ask about sexual health or contraception,” explains Shamala. When Hanai began developing content for Kenya, the team discovered that audio in Kiswahili was the only way to reach people who could not read English. Far from straightforward, team Hanai’s journey involves dealing with individual scenarios of different complexities.

Originally from Malaysia and a medical scientist by education, Shamala’s work in medical communications took her across Southeast Asia and to Germany and Luxembourg. She founded Hanai with what she describes as “a team of very close friends”. “They are people who I have worked with, or they have been my boss, or we’ve lived together,” says Shamala. The remote company has a core team based in San Francisco and western Europe with local teams in the communities they serve. Hanai is in conversation with the Vodafone Foundation and the Orange Foundation for partnerships that will further their reach into communities, and KiwiTech supports Hanai with investments in technology.

Struggles of Running a Social Enterprise

As a social entrepreneur, Shamala has found that building a team is the most significant challenge. “We’re not driven by the dollar but actual social impact, so it’s difficult to find people with the same motivation who will stick together and fight it through to keep it going,” she notes. Next on the list is working with the governments of different countries. “Although there are some of us who have worked with governments before, getting through the red tape and knowing how different countries work can still get mind-boggling,” says Shamala. She also points out the challenge of raising funds as a woman without a tech background and for a social startup. “Trying to show the impact that we have is something that I go through almost daily, and I think it will continue to be a challenge until our product itself becomes revenue making,” says Shamala.

Despite the difficulties, Shamala believes it’s all a part of the fluid nature of entrepreneurship. “You take many steps forward, then you take ten steps backwards, and you keep playing the game,” she says. Shamala derives inspiration from her maternal and paternal grandmothers, who she says were entrepreneurs in their own right. “I grew up seeing their bravery, and that gave me the courage to start something new all by myself and see where it takes me.” Meanwhile, she received her best advice at a young age from her grandfather, who taught her that nothing could hold her back. “It’s what allowed me to create a digital health product without being a techie myself. I didn’t allow it to hold me back,” shares Shamala.

Hosting soirees, dancing and taking care of her health with regular workouts is how Shamala unwinds from the demanding life of entrepreneurship. She’s also a passionate reader who reads several books simultaneously, so recommending books comes easy to her. Reading Slicing Pie: Funding Your Company Without Funds by Mike Moyer early in her entrepreneurial journey proved helpful as she started the company with her own funds. “It was a good way to look at how to work that out with friends who were coming into the company. It took away a bit of the stress of going after the first round of funding immediately,” says Shamala. She recommends the book to aspiring entrepreneurs for its tools and worksheets. Becoming by Michelle Obama is another of Shamala’s recommendations. While it’s not a business book, Shamala says it offers perspective. “Her journey is of someone who supported a spouse who wanted to do big things. When you choose to become an entrepreneur, you put your family through a lot, so it’s important to understand the other end of it,” explains Shamala.

Thorough research is her advice to aspiring digital health entrepreneurs. “One of the biggest issues we see in the market is that people think of the product first,” notes Shamala. Instead, she recommends approaching it by first understanding what you want to solve, which makes the problem clear. “Then look at the ways it’s already being solved,” she adds. “Understand the pain point and then start creating your product.” Working in digital health is exciting to Shamala because it offers the opportunity to change lives and bring hope. Pushing the last digital mile to take healthcare products deeper also keeps her motivated. “In its nascent stage, the digital health industry served the literate and reasonably wealthy who knew how to use technology, but now the industry is breaking boundaries,” points out Shamala. “We’re no longer held back by the lack of doctors or nurses as long as we can push a digital product through and everybody’s working on various angles of that.”

The life of an entrepreneur can get very lonely, believes Shamala. Borrowing a Malay proverb to illustrate, she says, “You’re like a frog living under a coconut shell. You’re juggling your day by yourself, not knowing what’s going on outside.” Communities like the Galen Growth HealthTech Cohort help entrepreneurs get a sense of the world beyond their immediate problems. “You have all these instant friends served to you on a golden platter. Then it’s up to you to learn from what they’re doing and how their journey is going,” she adds. It also helps with partnerships. “It’s an opportunity to see how you can synergise and leverage off the different networks that people have,” notes Shamala. Parting with advice for the coming months, Shamala says, “We’ve all been through hell this last year. The entrepreneurial spirit is to move on, but I think you should do yourself a favour and take a deep breath and appreciate yourself for surviving this.”