Meet the CEO: Docosan Is Easing Access to Healthcare in Vietnam 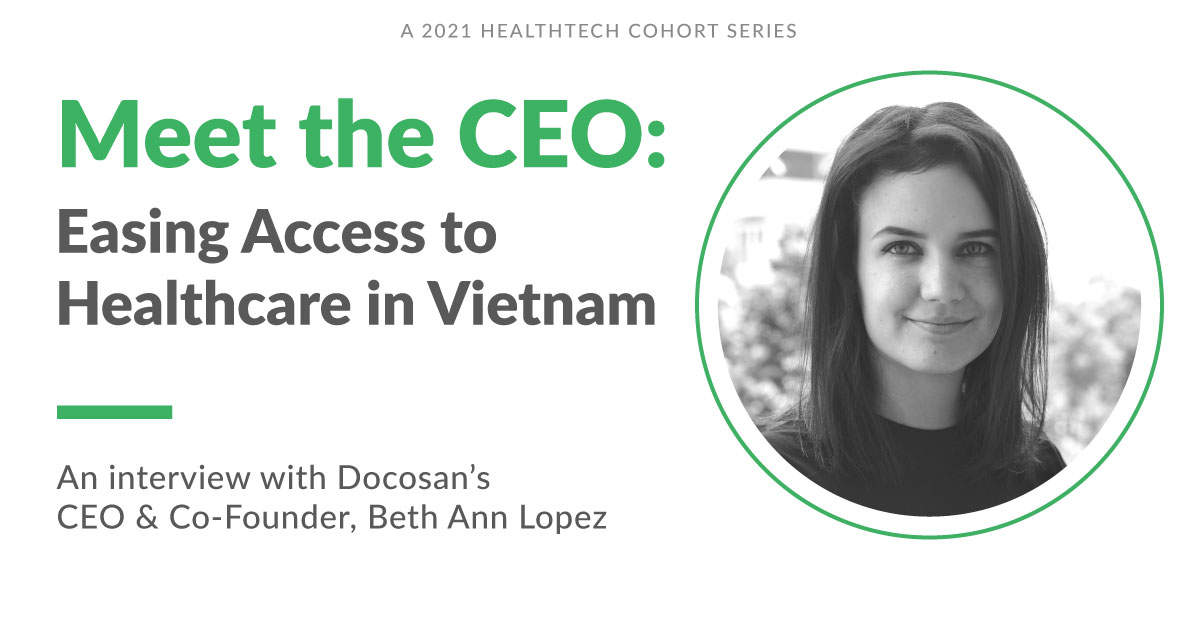 , was preparing for medical school in the US. Little did she know that the journey would lead her to start a HealthTech business based in Vietnam. Lopez joined the US Peace Corps to strengthen her medical school application. “At the time, you couldn’t choose the country. The government sent you where there was the most need,” recollects Lopez. That’s how she found herself in Cambodia in 2012. “It was my first exposure to Asian culture,” she says.

Living in a rural community and working at a public health centre, Lopez quickly noticed the challenges in access to healthcare in the region. “The community health centre was supposed to be open 24/7, but in reality, it was open only for two hours a day,” says Lopez. “The doctors would see the patients, but because of lack of medicines and poor service, they would refer them to their private clinics,” she explains. Since doctors made little money in the public sector, they had private businesses but struggled to attract new patients. “The doctors used the public health centre as a means to get new patients. It was the only form of medical marketing in rural Cambodia,” notes Lopez.

Meanwhile, word of mouth referrals was the only way for patients to find healthcare. “I have seen variations of this in most Southeast Asian countries where there is a big and fragmented private healthcare market,” says Lopez. “Patients have no way of finding out about a doctor’s private practice and quality of care, and private doctors, clinics, and hospitals don’t have the means to get the word out about their services,” she explains. “The transparency doesn’t exist. There’s no database for information on clinics, and search engines will only show hospitals with the biggest marketing budgets,” notes Lopez.

After completing her Peace Corps programme, she continued working in the region. Lopez did some consulting and worked with Thailand’s public health administration. Her work and observations over four years made her passionate about development and the reasons for poor access to healthcare. This led her to pursue a Masters from the Harvard School of Public Health. During her time at Harvard, she met Farouk Meralli, Founder and CEO, mClinica, a Singapore-based startup offering digital solutions to pharmacies. “He suggested that I would have a larger impact working at a startup as it’s way faster than working for years on a development project or trying to push policy through,” recollects Lopez.

Although sceptical, she joined mClinica as an intern. At the time, the startup was launching its app in Cambodia. The opportunity to work on market entry proved to be a turning point for Lopez. “I was able to get partnerships, worked with administrative health in Cambodia and got many users in a short period,” she says. The first-hand experience demonstrated the impact one could have with tech in a startup. After graduating, she joined mClinica full-time, which took her to Vietnam. “After about a year and a half of launching in Vietnam, one in every three pharmacists in the country had downloaded the app. It spread like wildfire,” says Lopez. Convinced that a startup was the best way to introduce change, she wanted to return to her original motivating cause. “I enjoyed the work at mClinica, but I wanted to go back to the main issue that I was passionate about, which was community health and access to healthcare.” That’s how she decided to start Docosan in February 2020.

Docosan is a healthcare marketplace that Lopez describes as a “Shopify for doctors”. They can create their profile or clinic’s store, display their services, history and qualifications, offer packages and discounts, provide telemedicine and process payments digitally. While Docosan solves the problem of customer acquisition for doctors, it brings transparency to patients. “It allows them to navigate the healthcare system efficiently and discover the right doctor for their needs,” says Lopez. Patients can look for doctors by symptoms, speciality or treatment. “When they search for a particular symptom, they’ll get a bunch of doctors that can treat that issue,” explains Lopez. Patients can find out about prices, the different clinics around them, the background of the doctors, and read real reviews left by other patients.

Since most people in Vietnam don’t have health insurance, offering price transparency and the ability to compare prices has proved particularly useful to patients. “When they go for private healthcare, they’re paying out of pocket, so they’re price sensitive and price compare,” notes Lopez. The ability to find care for stigmatised conditions is another area where Docosan is becoming helpful for patients. “Interestingly, reproductive health and mental health are the main reasons people are booking,” says Lopez. The team feels proud about building a mental health network in a country where it’s still not talked about openly. “It’s the same with reproductive health. When someone is dealing with an STI, they don’t want to talk to everyone about it, but they also don’t know where to go,” she notes. “We are helping people get convenient and regular care that is also confidential.”

The startup’s seed funding round was led by AppWorks, a prominent Taiwan-based venture capital firm. Docosan had participated in the AppWorks Accelerator, one of the largest startup accelerators in Southeast Asia. Some initial conversations about fundraising turned into an interest in investing, and before they knew it, the team had raised their seed fund. “The total time I spent fundraising was around a week, and I’m grateful for that as it allowed me to focus on building my business,” says Lopez. Funding from AppWorks helped more than just financially. It also brought Docosan into the limelight and made other investors take notice. “After the round, many venture capitalists began reaching out to know more about the company,” says Lopez. Docosan has the potential for expansion in several markets. “The intervention can work in countries where there are many private clinics but not much information about them.”

Struggles and Motivation of HealthTech Entrepreneurs

It’s been a year and a half since Lopez turned entrepreneur. Describing the experience, she says, “It’s unlike any other job I’ve done before. There’s a new major challenge every quarter.” Releasing a minimum viable product was a learning experience for the team. “There were a lot of issues, but we learned a lot about what is useful to doctors and patients and what people are willing to pay for.” Based on the learnings, Docosan switched from a subscription to a commission-based revenue model. “Now it’s about getting more users and plugging weaknesses. Problems come up in all sorts of places, so how do we prioritise and make sure the user has a better experience,” she adds. Making a positive impact in a patient’s life helps Lopez balance the chaos of entrepreneurial life. “When a patient leaves a good review, it makes it all worth it. Knowing that we helped someone when they were stressed, that we helped them find the right doctor, and they had a good experience. It reminds us why we’re doing this, and it keeps me going.”

The immense potential for digital transformation in healthcare is another significant motivator for Lopez. “When you look at other industries, there are so many digital interventions that have changed things, and you cannot imagine going back to the old way,” she notes. “The future would be amazing if healthcare can transform in the same manner. I think technology has been late to come to healthcare,” she adds. Her advice to aspiring HealthTech entrepreneurs is to understand the pain point thoroughly before dedicating time and money to it. “Whatever issue you’re working on, you have to understand the needs of the patients and know inside-out what they go through.” The consequences of getting it wrong are also higher in healthcare compared to other industries. “You have to be careful as you’re dealing with human life, and you have to do things ethically,” points out Lopez.

A book she recently read, Radical Candor: How to Get What You Want by Saying What You Mean by Kim Scott, offers helpful tips on managing teams. “The underlying premise is that you have to be human, but you also have to be honest with feedback to accomplish big things,” says Lopez. “Sometimes being direct can be difficult, and it shows the consequences of not doing that.” Noting that female managers are perceived differently, Lopez also found the book helpful for its advice tailored to women.

Lopez turns to Galen Growth for support tailored to startups in Southeast Asia. “There are tons of startup articles in the US, but they don’t apply here as the context is different,” she notes. The Galen Growth HealthTech Cohort also helps with mentorship and connections, which Lopez finds invaluable. “Hearing the experiences of other founders and how they solved a similar problem is very useful.” It helps with partnerships which can often be more challenging than funding. “Especially when you’re a new startup, you’re going from zero brand recognition. Being a part of Galen Growth is almost a way of vetting,” she adds.