Meet the CEO: The CareVoice Is Helping Health Insurers Digitise Their Business Through Its Open Platform 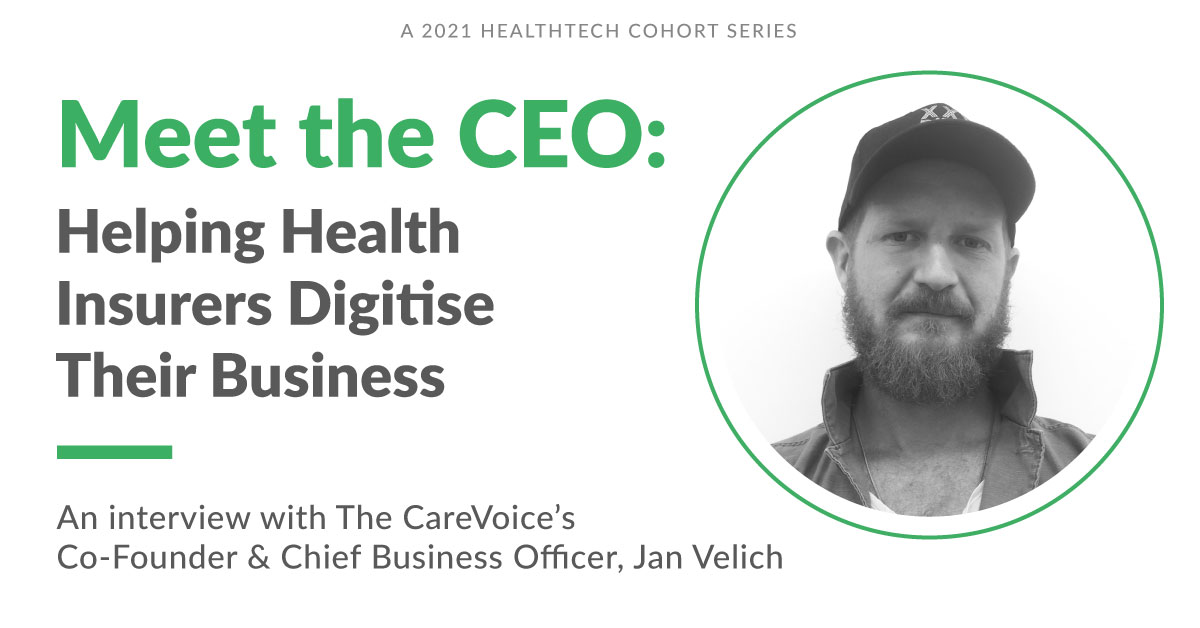 The founder trio of The CareVoice

believes health insurance is a largely untapped market – both by insurance companies and their members – a gap that technology can help bridge and optimise.

The COVID-19 disruption accelerated the digitisation process by giving the insurance industry a chance to look at the downside of their relatively conservative digital adoption strategy compared to other industries. “During the pandemic, social distancing created challenges for many processes. Customers had rising needs for all kinds of virtual medical and healthcare services, many of which not yet entered into the service catalogue of insurance offerings…” said Jan Velich, Co-founder & Chief Business Officer.

Thus, insurers face the challenge of speeding up the processes and providing additional services that can serve customer healthcare needs from a holistic point of view. “Insurers realised they needed to transform their business approach from a product-centric to a customer-centric and service-oriented one. And external partners like CareVoice offer the infrastructure that can help digitise their business and access multiple services quickly and efficiently,” noted Velich.

The Shanghai-based startup’s flagship product is a first-of-its-kind open platform enabling digital health insurance. CareVoice OS 2.0 helps insurers serve and better communicate with their customers by giving them access to health services across the entire healthcare journey, from care-seeking to health management.

“Insurance is not really resonating with people right now,” says Velich. He believes it has a lot to do with the traditional approach that insurers were applying. “We’re helping insurers close this gap with technology. We provide a large variety of health management services that can track customer behaviour but also programs such as health score, online community and rewards or discounts to encourage them to stay healthy, or to help them treat medical issues.”

For insurers, these value-added services have a positive impact on customer acquisition and retention. “When they know their customers and how they behave with specific digital and health management services, insurers will be better equipped to serve their members,” explains Velich. Service integrations built into the product act as multiple touchpoints to “build customer loyalty quickly and effectively”.

The founders believe that a lack of differentiation is another factor holding back the industry. Taking COVID-19 as an example, Velich illustrates, “Within a few weeks of the outbreak, everyone was offering a COVID insurance.” This is a trend the founders have long observed in the industry. “It’s easy to be similar in terms of the product and underwriting, and then it’s the agent’s relationship with the member that makes the difference,” explains Velich.

“To speed up the adoption of our platform, we designed tailor-made insurance products addressing the needs of a specific population according to their lifestyle or life stage. “The startup believes that their offering helps insurers to differentiate from competitors and thus provide solutions relevant to their customers and post-COVID era.

Beyond business models, The CareVoice is optimistic this will change health insurance behaviour. “Why must health insurance only be for situations when something happens?” points out Velich. Explaining the vision driving the startup, he says, “We’re trying to see what additional points we can introduce on the health insurance journey to help one live a better life.” The ready to deploy CareVoice 2.0 has more than 30 health management service partners and is growing, covering geographies like China, Hong Kong, Malaysia, Thailand, Singapore and Europe.

From Athletic Beginnings in the Czech Republic to Business in China

As a teenager, Velich didn’t imagine running an insurtech startup in Asia. Born in Prague, he was on the path to becoming a professional ice hockey player in Canada when an early injury forced him to shift careers at 21. He restarted as a stock trader in New York City when a project for his then portfolio client, the American Cancer Centre, took him to Shanghai.

“From working at the New York Stock Exchange and then going to Shanghai, I was amazed to see the exponential growth in retail, business and hospitality,” recollects Velich. However, he noted significant gaps in healthcare, a learning he owes to his doctor parents. That’s when Velich launched his consulting business and began advising pharma companies about the private sector. His early work in the region led him to meet Sebastian Gaudin, now co-founder & CEO of The CareVoice, who began the startup in 2014 as a review platform for medical services.

“I joined him as an advisor and jumped in fully in 2016 when we decided that the business should pivot towards insurtech,” says Velich. The young founder is particularly excited about the Asian market. “The growth over the past three to four years, and even since the pandemic, has inspired me to continue working here,” he says. “Asia is thriving, and I think the region is set to lead the growth over the next decade.”

Building an Insurtech Startup From the Ground Up

Besides an impressive portfolio of partners that boasts insurance players like AIA, Cigna, Generali and Ping An, the founders are also proud of growing their team to over 50. “We are also proud that more than half the team is R&D, so all of our technology and solutions are developed and owned in-house,” says Velich. The CareVoice is also hiring crème de la crème talent, the most recent being a general manager for the company’s business in China. “He was previously with a competitor that was already an IPO when we were just five people. Getting this kind of talent is also very optimistic for us and our future development,” beams Velich.

He points out the importance of strong leadership to achieve growth. “When we started, we were just the three of us, so we were like the kings of our respective functions – business, investment and product,” recounts Velich. Of course, as the company grew, so did the functions. “Then it needs to be more structured, and you need to have strong leaders. This is one of the aspects we have been able to strengthen over the past two years,” he adds.

Entrepreneurial Challenges That the HealthTech Cohort Can Ease

Like many entrepreneurs, Velich agrees finding the right people can be a struggle. “When you’re starting, there are going to be ups and downs. It’s difficult to find people who are willing to fight,” he notes. “That’s when you know who is on your side. Sometimes people aren’t, and that’s okay because it’s probably not the kind of thing they want to experiment with,” he adds. “It has taken us three years to establish the team we have in Mainland China and Hong Kong right now,” says Velich.

Market readiness is another challenge the founders have observed in insurtech. “When Neil (Liang, Co-founder & Chief Product Officer, The CareVoice) first had the vision of an operating system for insurers, it was too early, and we had to find a way to get into the market,” says Velich. To tackle this, the founders are trying to micro-understand their customers. “We want to know what the insurers doing the daily job are willing to accept as an innovation level because it’s them who need to manage it,” he explains.

The founders are excited to be a part of the Galen Growth HealthTech Cohort. “It offers the Cohort startups a unique opportunity to engage, which can take us to the next level. Whether it’s through partnerships with a customer or investor,” says Velich. “In addition to all the support, I think it can bring us the exposure we need,” he adds. The platform and its network can help insurtech with visibility. “In the area of technology innovation, Galen Growth is certainly a very influential actor. The information that you have on investments and startups is very relevant and something we can learn from,” he says.

Dealing With the Uncertainties of Entrepreneurship

Physical activity helps the former athlete balance his chaotic entrepreneurial life. “For me, activity is vital to charge for the day; otherwise, I can feel the difference in my mindset. It helps me release the steam a bit,” says Velich, who has found his alternative to ice hockey in Muay Thai boxing, swimming and running. When he’s not working, he’s either chugging beers with family and friends or building his vinyl collection. “I’m Czech, so ultimately I do love good beer. And I’m collecting vinyl from the ’60s, ’70s and ’80s. Blues, rock and roll, and soul is my thing,” he says.

Velich compares running a startup to being in a rock band. “You need to be Mick Jagger.” That’s what he would tell anyone aspiring to be an entrepreneur. “You need passion and creativity, but also a big amount of determination and a little crazy in a way,” he says. Velich has “a bit controversial” recommendation from his bookshelf – Trump: The Art of the Deal by Donald Trump and Tony Schwartz. “Regardless of the political view, it’s a good book for everyone in insurtech to see how he built his empire in NYC and how he negotiated with all the governors,” notes Velich.