Meet the CEO: Radiobotics Is Augmenting Radiology With Technology 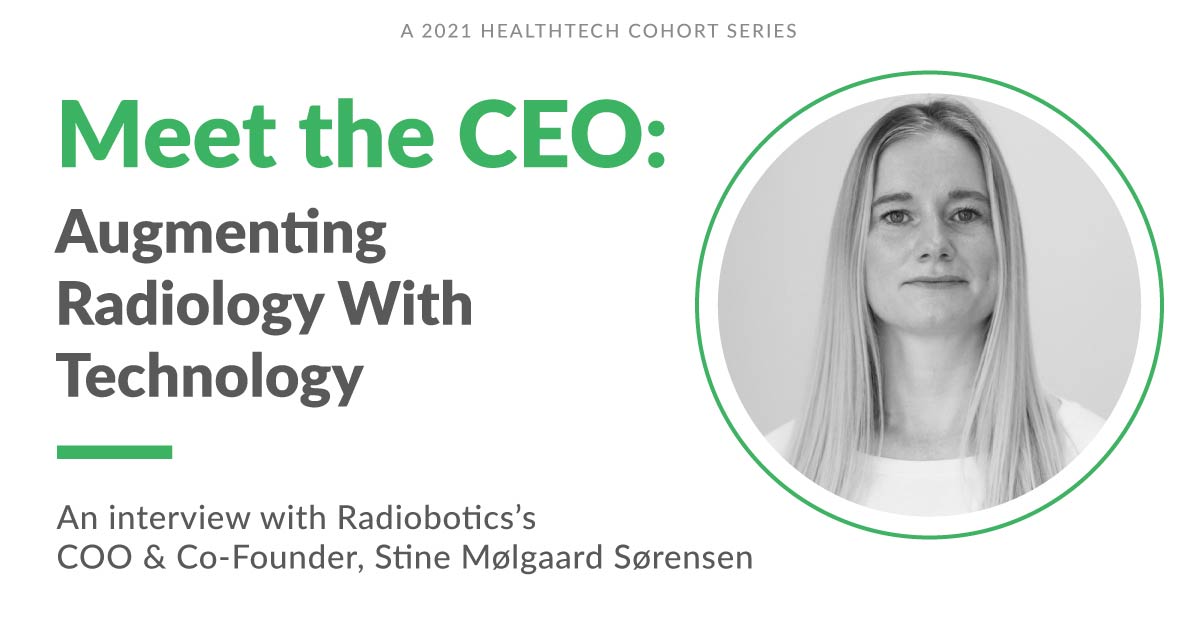 , is a globetrotting entrepreneur from Denmark who is introducing new technology to healthcare by staying ahead of time. From being a consultant at a US consultancy to working with one of Denmark’s biggest pharmaceutical companies, Sørensen has been involved in digital transformation in various capacities for over a decade. When she realised the pace of big corporates wasn’t keeping up with the fast-changing innovation, she decided to turn to startups. “I could see how the whole health space is hungry for digital solutions, so I realised I had to do my own thing to be ahead of time,” says Sørensen.

She joined a startup that was building machine learning algorithms for consumer technology, which saw a Silicon Valley exit. During this time, she met Mads Jarner Brevadt, CEO & Co-founder, Radiobotics. “We met when I was speaking at a healthtech conference in London, and he was working in the orthopaedic department at Imperial College,” recollects Sørensen. While she had already begun helping Brevadt build Radiobotics, she felt the need to take some time off. “The exit was probably one of the toughest things I’ve ever tried,” she says.

An Entrepreneur on the Move

Sørensen travelled around New Zealand, South Africa and Botswana. She took the time for reflection and worked on a book about “why it is important to experiment with new technology” before joining Radiobotics full-time. Very active in the startup and healthtech environment, Sørensen also sits on the boards of other companies and invests a little herself. Amidst all of this, travelling brings her balance and perspective. Being close to nature offsets the stress that comes with making big decisions and solving complex problems. “I feel so much more efficient. I feel like I can do a whole day’s work in two or three hours,” she says, from the Azores Islands. “It’s refreshing to be somewhere else, to be challenged by another culture and another way of doing things.”

The contrast of different worlds energises her personally and professionally. She believes it may have something to do with growing up in Scandinavia. “Coming from there, you have a lot of privilege, and you become aware of this when you travel.” At the same time, Sørensen belongs to a poultry farming family that adds more variation to her perspective. Recollecting the time she was visiting Silicon Valley often for the exit, she says, “After speaking to all these big tech companies there and then coming back home to the countryside was such a relief. The world just stood still. There was no startup talk of big numbers and seven-minute pitch.”

Challenging the ordinary inspires Sørensen and keeps her glued to the healthtech startup ecosystem. “When you’re trying to do something new, you have to build technology that works, which is difficult, but you also have to create the vision to attract people to work with you,” she says. But it goes beyond that. “You also have to influence the whole system because the healthcare system is not necessarily ready for new things, and the greater society is in its very early days understanding how they can benefit from this.”

Her greatest entrepreneurial gratification is when the new technology she’s advocating receives acceptance. “From a startup perspective, it’s exciting when you show your technology to someone, and their immediate response is ‘I could really use this,” notes Sørensen. It’s also exciting because new technology changes the rules of how things are done. “When you succeed with that, and you’re being listened to, it shows that we’re truly doing new things. I’m proud of being part of that change,” she adds.

With Radiobotics, Sørensen and the team are automating the reading of x-rays to address the lack of radiologists in healthcare. The startup, incorporated three and a half years ago, builds machine learning algorithms that can detect musculoskeletal diseases in 2D x-rays. While technology is developing rapidly in CT, MRI and cancer detection, the company wants to work with low risk but high-volume areas. “The field of radiology is advancing very much, and there’s demand for technology to support this area,” says Sørensen.

With not enough radiologists available to read x-rays, the reports have a longer wait time, and it’s also costly. Besides, the work pressure leads to inaccurate reading. “There are studies that show a radiologist can have a different conclusion two hours after they’re done with the reading,” she notes. Technology introduces efficiency and consistency to the process.

The startup’s first product, RBknee, detects osteoarthritis in the knees. The company is working on more products to cover the whole skeleton. “Our first product is now CE-marked and ready to be commercialised in Europe. We have also submitted it for FDA clearance, so it’s ready to be international,” informs Sørensen. “It proves that we can build the technology, have it regulatory approved and clinically validated,” she adds.

If the project with NHS moves to the next stage, the Radiobotics technology will be installed in 11 UK hospitals for testing. If successful, it could theoretically become a standard in all of the UK in the next stage. The startup is also working with the Danish government and the healthcare system. “With the same idea of getting it right the first time and increasing consistency, we’re looking at how we can reduce MRI scans. We believe we can prevent up to 10% of MRIs,” says Sørensen. Radiobotics is also part of the accelerator program with Texas Medical Centre. “As a healthtech startup, if there’s one place you’d like to be, it’s here. It’s great validation both in terms of the problem we’re solving and a need for what we do in the US,” she adds.

Working with vRad, the largest teleradiology company in the US, is another partnership that holds pride of place for the startup. “They have a huge amount of data and at least 500 radiologists employed. We’re working on prototypes with them that they can use to be more efficient and consistent,” informs Sørensen. A prototype that took four months to make is now being tested internally, working well and on its way to production. “That’s a short turnaround time for Software as a Medical Device. It shows we’re capable of building these things and supporting huge companies to solve their problems,” she adds. Radiobotics is also doing multi-centre clinical trials with three major hospitals in Denmark, Germany and Holland. “We’re looking into how much confidence they have in the output of our algorithms.”

The Art of Staying Ahead of Time

For Sørensen, hiring the right talent and setting business processes that keep up with the fast-changing healthtech landscape are the top challenges of running a startup. “I don’t think you can ever learn how to hire because you’re always hiring for different roles. I feel it’s something that will always be difficult,” she points out. While talent acquisition and recruitment companies can help find profiles, Sørensen says, “You would need to have this person come work for your company before you can know.” The young entrepreneur believes that running a truly disruptive startup means questioning your processes frequently. “It’s a little tiring because things were just working and now we have to pull it all apart again, but you have to challenge things all the time to stay ahead of the game,” notes Sørensen. “Particularly as a healthtech startup because the space is so fragmented and there are so many rules and regulations and changes.”

The entrepreneur recommends Dreams and Details by Jim Hagemann Snabe, Mikael Trolle, a book she’s currently reading, and that resonates with her. Written by the Danish chairman of Maersk and Siemens, the strategic leadership book is based on innovating from a position of market leadership. “Even though you’re a market leader or your coming is growing well, there will be a time when you need to change and innovate. It’s talking about how to identify these seasons of change and thinking of them before they must happen,” says Sørensen, who believes startups need to adopt this line of thinking for success. “The book is also about how you create the dream or vision and what are the details you need to think of before you can realise it,” she adds.

While the Radiobotics team is currently focused on the European, UK and US markets, the startup has long-term plans to move eastwards. That’s where there the Galen Growth HealthTech Cohort comes in. “I’m interested in engaging with this program to help us recognise what our next market should be,” says Sørensen, who believes market research isn’t entirely helpful when you’re looking for new markets for new technology. “The market doesn’t exist yet, so connecting with startups and the innovative ecosystem helps to understand the pathway towards being successful,” she notes. “Hearing of startups, seeing what they’re struggling with and how they navigate is interesting and gives a better understanding of where there is an opportunity,” adds Sørensen.