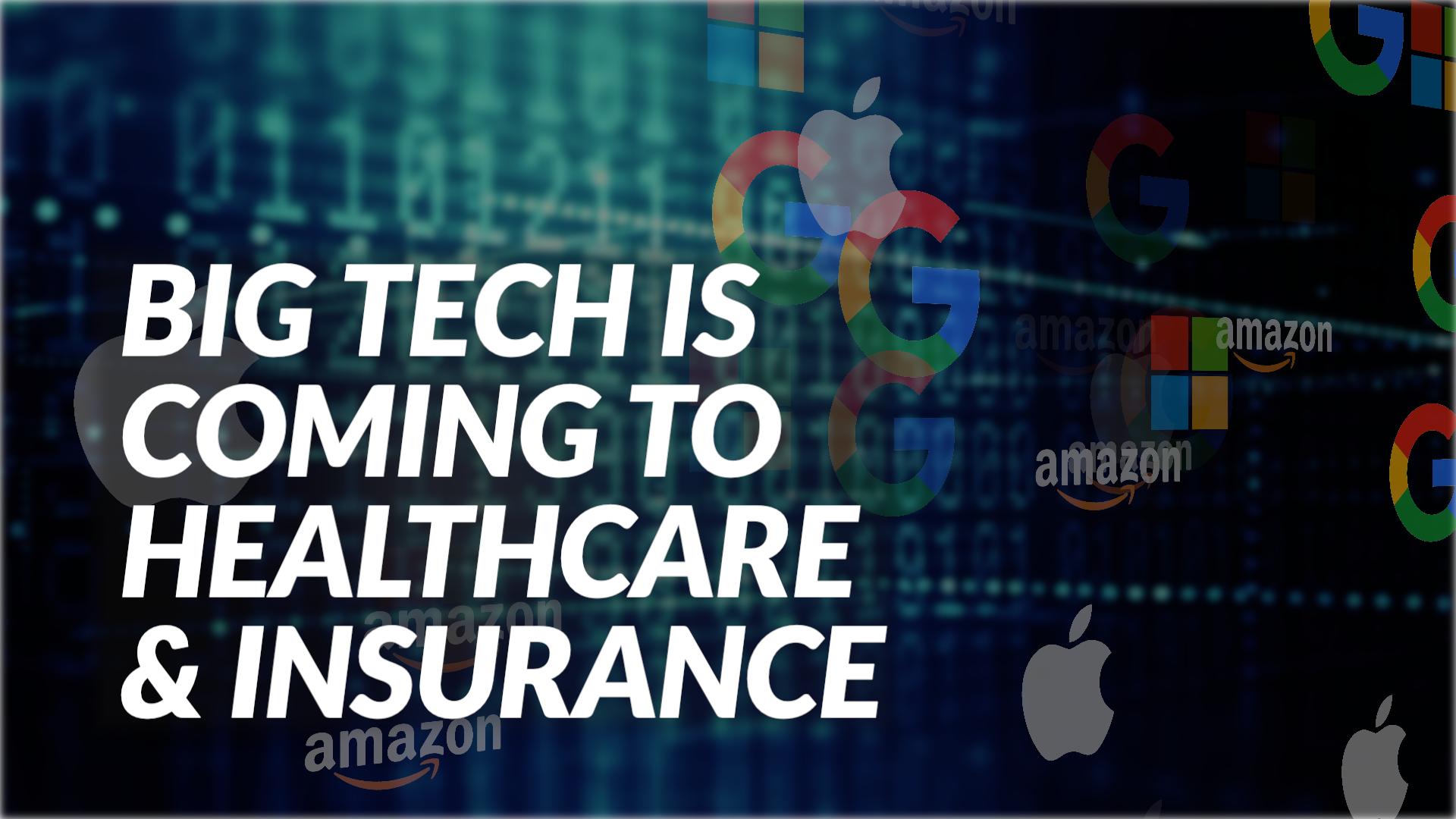 It is no longer a case of when Big Tech will enter Health and Insurance, but how fast and to what degree will disruption come. COVID 19 has woken regulators, customers and patients, to the ease and usefulness of technology in Healthcare.

Yet despite these rapid changes, many insurers processes are still analogue (see below), and painfully slow.

So, will a combination of Big Tech, and perhaps new Health Insurance products, underwritten by the re-insurers, see the beginning of the end for the big multinational carriers?

Thomas Buberl, chief executive of France’s Axa, predicted the industry’s ‘competitors of tomorrow’ will be data-driven tech companies such as ‘Facebook, Google, or Apple’ rather than upstart insurers

Could Big Tech’s powerful combination of technology, customer data, and hardware capability transform the industry?  What does Google’s entry into Insurance with Swiss Re, tell us about the direction that this disruption may take?

Before we get to answering that question, let’s begin by looking at some of the recent moves made some of the most prominent technology players.

Google’s journey in Healthcare is a mixed bag.

The company operates two distinct health operations, one Google Health, is firmly tied to the mothership.  The other, Verily, operates more as an independent business unit.

Google Health has been both shuttered and re-opened in its short history.  Its efforts to apply Google thinking, to digitising health records in the US (most notably for US health provider Ascension), may have been done with the highest of intentions, but have met with scepticism at best, and outright hostility by many observers.  The Ascension PR fall out underscored just how sensitive the area of Health care is for the large technology players.

Despite these bumps, Google Health has a 600+ headcount, and is vocal around its mission.   “If we’re going to really make a difference in the lives of people’s health, we have to do that by addressing not only tools and support for carers, but we have to do that as much as we can directly to consumers and other parts of the system,” Chief Medical Officer Karen DeSalvo said in August 2020.

On the wearable and digital biomarker side, Google has been making slower progress than its rivals. Its Wear OS, dependent on third parties such as Fossil, has had limited market penetration.  To address this, Google is endeavouring to close out its USD $2.1bn acquisition of Fitbit.  While there are regulatory hurdles, especially in Europe, the deal seems likely to go ahead.

More interestingly, in August 2020, Verily, announced the creation of Coefficient Insurance, in partnership with Swiss Re Corporate Solutions.

The new insurance company’s first product announcement is around the relatively obscure stop-loss insurance (protecting employers from excess staff health costs), but it is likely that the number of insurance lines will expand rapidly in selected markets.  Could this be a model that becomes more prevalent?  Almost certainly yes.

Amazon is the best placed to become a serious challenger to the health and life insurers.

It has already made progress on several significant components the Healthcare, and will soon have capabilities ranging from wellness applications and digital biomarker data capture, medical consultations (Amazon Care, US only currently), and pharmacy script fulfilment (US and India).

The big news in September 2020 has been the announcement of the Halo band device, and accompanying app.  Fitness bands are nothing new, but the Halo band has some tricks up its sleeve, including “Tone” which measures mood levels using the customer’s voice.  At an attractive price point, this device could see rapid market penetration.

Meanwhile, Amazon Care is currently being trialled amongst its employees around Seattle and gives signals of where the company is heading. It combines telemedicine (via chat and video), follow-up consultations, and prescription delivery to the door.

Amazon’s acquisition of PillPack, an online pharmacy, offering personalised medication packaging, further underlines its commitment to deliver on its brand promise of “Healthcare built around you”.  In 2020 it announced the trial of an online pharmacy in India.

Haven Healthcare, the partnership between JP Morgan, Amazon and Berkshire Hathaway, continues to make announcements around its vision to “transform health care to create better outcomes and overall experience, as well as lower costs…”.  Details of how exactly this will be executed on are scarce; however, though with three influential players at its helm, its strategy and impact are bound to be broad in scope and scale.

Underlying all of this is Amazon’s mastery of data.  By combining digital biomarker data, Amazon purchase history, location and other personal information, gives a super-powerful dataset.  Using analytics and AI, Amazon will be able to do the things that many insurers can only dream about currently.  Deep insights into risk and the ability to translate this into personalised pricing, faster underwriting, and the ability for precise marketing targeting.

Amazon has the brand, vision, reach, data and technological know-how to make a significant impact in Healthcare, and how we pay for it.

In 2019, on CNBC, Apple CEO Tim Cook, answered a rhetorical question “What will Apple’s greatest contribution to mankind be? It will be about health”.

Apple Watch continues to extend its feature set, series 4 brought the ECG, and Series 6, further enhances sensor capabilities, with a blood oxygen sensor, which promises a host of useful applications, and potentially, the ability to spot early signs of illness such as COVID.

Apple’s CareKit and ResearchKit have already enabled third parties’ access to anonymised data, enhancing studies on cardio health and chronic disease.   Apple and Johnson & Johnson are running a clinical trial exploring whether Apple Watch can be used to detect atrial fibrillation, for example.

Rather than owning outright pieces of the healthcare ecosystem in the way Amazon is, Apple’s strategy instead seems to be using its hardware and software, with Apple Watch, Health kit, and the Activity app, as powering parts of the Health Ecosystem through partnerships.

Already several insurers and governments have entered into strategic relationships. Canada’s Manulife and US-based Aetna has offered rebates for the Apple Watch, in return for completing activities.  In September 2020, the Singapore government and Apple announced a country level health fitness program, the first of its kind.

Microsoft abandoned attempts to play in the crowded consumer wearables space in 2019, when it through in the towel on its short lived Band device.

Today, the focus is very much on how Microsoft is using its suite of enterprise level software and services, to enable the health care ecosystem.

Microsoft Cloud for Healthcare, enabling clinicians and patients to manage and access data, together with MS Teams powering Video consultations, has been implemented in several major US hospitals.

In the Insurance industry, Microsoft continues to be a major vendor of enterprise software, especially in take-up of Azure.

While Microsoft will continue to play a critical infrastructure role in Healthcare, there appears no desire or intention to disrupt insurance and health provision, in the way that Amazon, or Google have signalled.

Dealing with a health or life insurer in 2020 is very much the same as it was in 2000.  The following five areas of an insurer’s operations are proving highly resistant to change:

Product complexity.  For many insurers, the product mindset is firmly anchored to the past. Unable to truly innovate on old technology stacks, the insurers stick to what they know.  Selling complicated products, that often add new features and riders in response to the competition.  Shifting to entirely new ways of selling Insurance, in the way that Ping An has, has been stifled by archaic legacy systems, a high-cost base, and a risk-averse mentality.

Underwriting.  Despite the promise of “straight-thru” automated processing, limited progress has been made.  Insurers seem content to build small incremental process improvements, rather than a wholescale re-build for Life Insurance and comprehensive Health products

Reliance on Sales Agents. A significant part of a carrier’s operation is still selling products through thousands of sales agents.  Sales channel management is a big overhead (in some Asia markets agent churn is 70% pa), and high cost to the customer (around 30% of first-year premiums are paid out as agent commission).  Due to the complexity of the products themselves, the sales channel has been hard to digitise, with many insurers still wholly dependent on this channel.

Claims management, another area where digitisation has been slow, with decades of policies, with varying exclusions and wording, leading to complicated rules engines, fraud checks, and manual processes to handle exceptions.

Data capture and analytics. Lastly, in an age of Big Data and AI, the level of first-party data an insurer has access to, is surprisingly thin.  Low levels of customer interaction, disintermediation by the sales agency channel, and with other parts of the customer journey hard to track (patient adherence, hospital re-admissions for example), leads to a patchwork view of the customer.

This combination of the insurer’s inertia to truly digitise, and the prospect of a slice of a USD $3.6 trillion-dollar US health industry, means that conditions are still ripe in 2020 for technology disruption across both health and insurance.

So, could a technology player truly challenge the big multinational players?    Before we answer, let us review the areas where the incumbents currently operate, and where technology players may have alternative approaches.

Looking through this lens, most of the core components of what a carrier does, Amazon, Google or perhaps Apple, can do better.  Even the pieces that big tech cannot currently do does not require the traditional insurers either.

The question is then perhaps, what kind of market entry model, enables disruption?

Big Tech and the Re-Insurer: A New Hybrid Model Will Emerge, and One That May Exclude Multinational Insurer Clients

For the next five years, we can expect to see more partnerships between re-insurer and big technology, similar to the Swiss Re / Google Alphabet model, each playing to their strengths and building new products.

The Re-insurers are arguably the most forward-looking parts of the big insurer landscape.  Sitting on a vast repository of global data, from a multitude of international insurer clients, they are in a prime position to partner with the tech firms.  It is much harder to see what the traditional primary insurers will bring to the party when much of their core capabilities (sales, service, claims) could eventually be delivered through technology.

For the next 2-3 years, Amazon and Google are likely to experiment in key markets.  For Amazon, this almost certainly will be the US and India (it has already invested $6.8bn in India), and look to join the customer journey dots between its new wearables business, and pharma acquisitions.

Google seems likely to extend its US-based relationship with Swiss Re.

As for insurance products, they are unlikely to go into complicated traditional whole life products, and much more likely to develop smaller, easily understood products, that could include term life, corporate health cover and smaller, short duration insurance.

However, its not a slam dunk.  The BigTech players increasing regulatory scrutiny by Congress, maybe the only barrier left to them making significant in-roads, to both Insurance and Healthcare.

For more on how Galen Growth’s solutions can help with your digital health strategy, click here.

If you’re looking for a direct consultation with us, complete the form below.

Take The Next Step

For advice on how your organisation can benefit from partnerships in HealthTech, contact us now for a free consultation.